The two commonest diseases in the mouth are tooth decay [caries] and gum disease [gingivitis/ periodontitis]. Caries is the commonest disease in the world in adults and the 10th in children.

Caries is essentially caused by this very simple equation-

We have lots of bacteria living all over us, on every surface inside and out that you can possibly think of. In fact there are more bacteria living on us than there are cells in our actual body. They are called commensal organisms they live in a symbiotic relationship with us. Some of them perform a useful function and some of them do not but they don’t cause us any harm. We have an immune system to get rid of any that shouldn’t be there or are trouble makers- disease causers [pathogens].

So your mouth has lots of bacteria in it, all over the skin inside your mouth [oral mucosa], your tongue, your teeth and in your saliva you have about 10 billion bacteria in your mouth at any given time. The bacteria stick to the proteins in the film of saliva which coats every surface of your mouth.

Bacteria settle on some of the surfaces in your mouth. So for example they don’t settle on oral mucosa as it, like all skin is being constantly shed but they do settle on your teeth. And when they settle they form what’s called a bio film. To give you a domestic analogy if you filled a milk bottle up with water and put it on your kitchen windowsill, after a couple of days you would find a little film of green algae lining the inside of the glass. This is a bio film- a little layer of micro-organisms [micro as in only seen with a microscopic and organism as in living thing]

Plaque is a sludgy paste of salivary proteins, food debris and bacterial biofilm-Yuk!

There are lots of different types of bacteria in plaque approx 600 that we know of and no doubt a lot we haven’t discovered yet. Like all living things they breed and they breed prolifically doubling in numbers about every 5 hours.

So on the outside of your tooth you have the salivary film [this is called the enamel pellicle] which is full of salivary proteins and the bacteria in your saliva stick on to the pellicle, this is the starting off layer. On a clean tooth the first bacteria to stick are called cocci and they will be all over the surface in 12hrs. Then what happens is other types of bacteria come along and essentially piggy back on the first lot, then the next lot come along and then piggy back on them and so on and so on so you end up with a complex colony that as it gets older has more bacteria, more different types of bacteria and more damaging bacteria the more mature it gets.

So the reason for brushing your teeth at regular intervals is essentially to keep reducing the colony to nothing again. That involves getting all of the plaque off all of the surfaces of your teeth, every surface is as important as every other surface.

We will come to teeth cleaning a bit later.

There is another section on different types of sugar in detail further on so for the moment I will just deal with sugar in general and its role in caries.

So these microorganisms happily living on the outside of your tooth in order to survive metabolise sugar just like we metabolise our food. The by-product of this metabolising is acid. The acid demineralises the layer just under the outside of your tooth’s surface [this is at a microscopic level]. If this carries on unchecked eventually the surface will breakdown into a cavity.

pH is a measure of acidity if you remember your chemistry lessons. The scale is 1-14. Little numbers acid, big numbers alkali, 7 neutral. The normal pH of your mouth is 7.4. Enamel starts to dissolve at a pH of 5.5. Now one of the functions of saliva is to neutralise the acid in your mouth, to buffer it back to normal but it takes at least 30 mins to get back above 5.5 and about an hour to get back to normal.

This is why it’s not just the amount of sugar you eat that is important but how often. If you are constantly snacking on sugary food and drink the acid never gets neutralised and so the demineralisation of your tooth or rather all of your teeth at the same time- continues.

So if you have an early lesion and you get the bacteria off it effectively and efficiently at regular intervals and you cut down the amount and even more important the frequency of sugar you eat and drink, the demineralisation process will reverse and you will arrest the caries. If however you have an early lesion and you don’t bother to clean the bacteria off it and you keep chucking sugar at it at frequent intervals the process will carry on going until you have a cavity.

Where does fluoride come into it?

There is another section on fluoride later, but this bit is about its role in stopping the carious process.

Before the 1980’s it was thought that fluoride needed to be incorporated into a tooth as it was forming before it erupted into the mouth. This meant it had to be ingested from water, tablets or salt.

We now know this is not correct.

Fluoride works by being present in the oral cavity in slightly increased concentrations to normal. It interferes with the demineralisation of enamel at the tooth surface and forms a protective layer by being incorporated into the outer surfaces of the enamel.

The chemistry/ biology of this is very complicated, but suffice it to say that it is the fluoride in toothpaste in the right concentration that is the most important thing rather than the fluoride you ingest.

Fluoride is not a magic bullet to eradicating tooth decay it’s an adjunct.

All 3 things are important-

Remove the plaque from all the surfaces of your teeth twice a day.

Reduce the amount and frequency of sugar.

Use a toothpaste with the right concentration of fluoride. 1300-1500ppm [parts per million for an adult]. 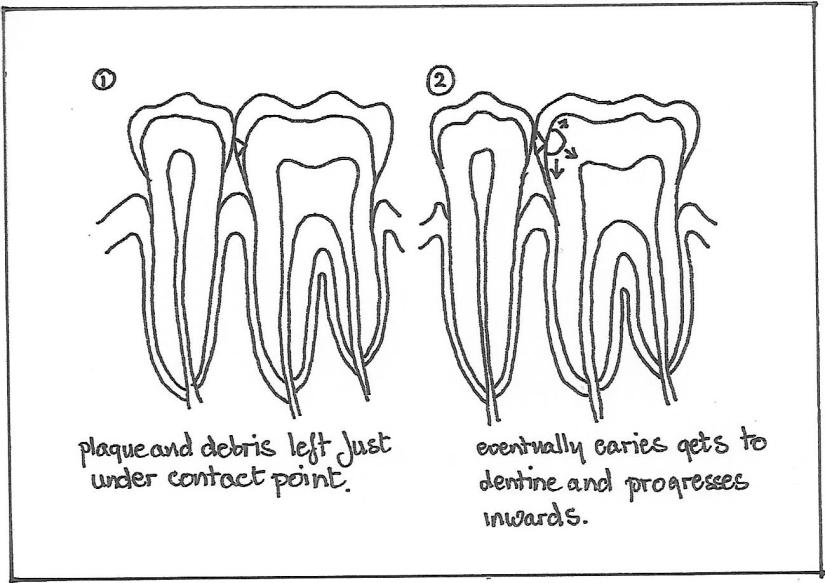 View all posts by howtolookafteryourteeth